Well, I lasted all of a month on the first pass at an upgraded home office audio setup. While it was a huge step up from the previous, isolated, every-system-for-itself output configuration, there were just a few wrinkles that I wanted to address while I was in this headspace.

As is habitual when I undertake these kinds of projects, I found just a couple additional tweaks and hardware add-ons to do. I wouldn’t call the changes they made “solved problems,” per se — everything worked just fine beforehand — but I did get a few additional features and niceties that I’ve really enjoyed.

I got comfortable with the Behringer mixer pretty quickly — they do a good job of explaining its features and illustrating example configurations in their manuals. In a couple scenarios, though, I started to get frustrated by the way it handled output routing.

There were effectively three sound paths out of the mixer:

When I was shopping for mixers, I knew an “alternate” output path would be important. I wasn’t interested in “monitoring” my own voice in my headset while I was on a call, or in a party chat in-game — I wanted my microphone audio streams to go somewhere else, and only device sound to come into my headphones or speakers. This meant I needed two separate audio buses out of the mixer.

The Behringer mixer accomplished this by doubling up two features. First, every input channel had a mute switch — this is a core feature of most mixers, even at the hobbyist level. However, their alternate output — named “3-4,” after the stereo pair of output channels it encompassed — shared double duty with the mute switch. When an input was muted, its sound went to this alternate 3-4 bus, instead of the main 1-2 bus.

The manual described this as a “convenience,” and during my initial research phase, I thought it would be adequate. After a while, though, it became a little troublesome. Doubling up between output routing and muting meant that there was no way to mute one microphone, for example, without its sound starting to come out of some speakers I had connected. Likewise, I couldn’t take a device input that was already set to the 3-4 bus, and mute it temporarily; doing so would mean toggling that device back to the main bus, which would broadcast its sound on any video calls I joined!

So I went looking for a different mixer to trade in for. Like so much of this project, my search started with terminology, and in this case I found the word “subgroups” — while the Behringer mixer had an alternate output as an afterthought add-on, mixers which provided multiple output buses as a core feature called them subgroups. On boards with subgroups, each individual input channel came not only with a volume fader, but also small buttons that assigned the channel to any (or none) of the subgroups.

After sorting through mixers with the other features I wanted, plus subgroups, I landed on the Mackie ProFX16v3. This mixer is significantly larger than I need, but most mixer lines tend to have a pretty sharp divide between the smaller boards with no subgroups and the larger boards with four or more. (The slightly smaller ProFX12v3 has two subgroups, but some vagaries of its availability at a local music shop led me to the larger 16-channel board.)

After getting the new Mackie board connected in place of the Behringer mixer, I was immediately impressed with the extra flexibility. I’m no longer locked in to using the “mute” switch as an output toggle — instead, the button can work as its label says, and actually mute individual channels. The output routing is accomplished completely separately, with subgroup selectors on each channel.

Next on the list of tiny (oh so tiny) annoyances was hooking up all the different output devices I wanted. The office currently has two separate pairs of speakers, positioned in different key places around the room, plus two sets of over-ear headsets.

With the Behringer mixer, I had managed to get most (but not all) of these connected with judicious overuse of the control room and headphones outputs, plus a few carefully placed cable splitters. But if I was investing in a Mackie setup, well, it turned out they had another piece of hardware that solved this problem too: the HM-400 headphone amplifier/distributor.

This rackmount piece of gear had a ton of capabilities packed into a single rack unit. Not only could it connect every output I had laying around, but it did so without a single splitter, and it offered me separate volume dials and mute buttons for each output — much like the mixer did for each input.

I hadn’t really realized how much input volume fiddling I had been doing as I switched headsets until I gained the ability to dial in each one separately. What’s more, I had previously been turning off my main speakers while on video calls by physically picking up the left speaker, turning it 90° to reach the back, and cranking down the dial. The mute switch on the amplifier ended that annoying ritual permanently.

These two new pieces of gear were exciting — who doesn’t love unboxing a shiny new rackmount device? — but the tweak I was most proud of had to do with the Xbox’s audio connection into the mixer. Recall from last time that I had been routing stereo sound out of the Xbox using a Techole DAC, which converted the console’s optical signal into a more traditional RCA connection.

This stereo pair carried both game sound, like music and effects, and any voices from my current party chat. Connecting it to a mixer input pair meant that I could use the volume fader to manage the Xbox sound relative to the Mac (and any other inputs). However, the chat voices were inextricably linked in with the game sound — or so I thought.

It turns out that a clever combination of settings and one additional cable could provide even more control over the Xbox’s sound output. At the top level of Xbox’s “Volume & audio output” settings screen, there are two key options.

First, “Chat mixer” lets me control how much of the game sound is played along with a party chat, with four options that equated to 100%, 80%, 50%, and 0% of the game sound. If I selected the 0% option — labeled “Mute all other sounds” — I could basically turn one audio output from the Xbox into a “voice only” output.

Second, “Party chat output” lets me choose where chat voices are played: on the headset, speakers, or both. In this increasingly complex audio world, “speakers” meant the Techole DAC connected directly to the console; “headset” really meant the connection from the Xbox controller, where most folks would plug in a gaming headset directly. I connected this line to an iRig 2.

I realized that, at this point, I effectively had two sound outputs from the Xbox: one through the DAC, called “speakers,” and one from the controller through the iRig, called “headset.” I set to digging through the iRig’s manual, and found that it had exactly one toggle that enabled a game-changer: a tiny FX switch on the side that played “device output” through an extra ¼” port.

Remember how the iRig is primarily marketed to electric guitarists who want to record on iPhone? Well, beyond recording, some apps act as miniature effects engines — you can connect a guitar to an iRig to iPhone, strum a bit, and the iPhone will apply a reverb or other nice effect and play the same signal back. The iRig has the capability to take this “device output” and send it along another cable. I’m obviously not using Xbox to apply sound effects to my guitar. I can use this device output feature, though!

What I wound up doing was this:

This combination meant that, when I joined a party chat, the headset output — what the iRig sees as the “device output” — would become only the voices from the chat, with no game audio mixed in. And since the Techole DAC was still carrying sound directly out from the console as “speakers,” I had that existing connection to keep game audio going into the mixer, with no party chat voices at all. Voila: I had split game sound from party chat onto two mixer inputs!

At first, this may seem like a bit of a hollow victory. After all, won’t I want to hear both the game and my friends in party chat at the same time? The vast majority of the time, that’s certainly the case. However, it’s very nice to be able to control their relative levels in the same way I manage all the other audio signals floating around — I can fine-tune how loud the background game sound is relative to the party, or vice versa. Moreover, I can make sure that the party doesn’t interrupt any dramatic moments in the game with their 100th a capella rendition of “All Star” by Smash Mouth, using that convenient per-channel mute switch the Mackie mixer offers.

All these changes led me to an updated wiring diagram: 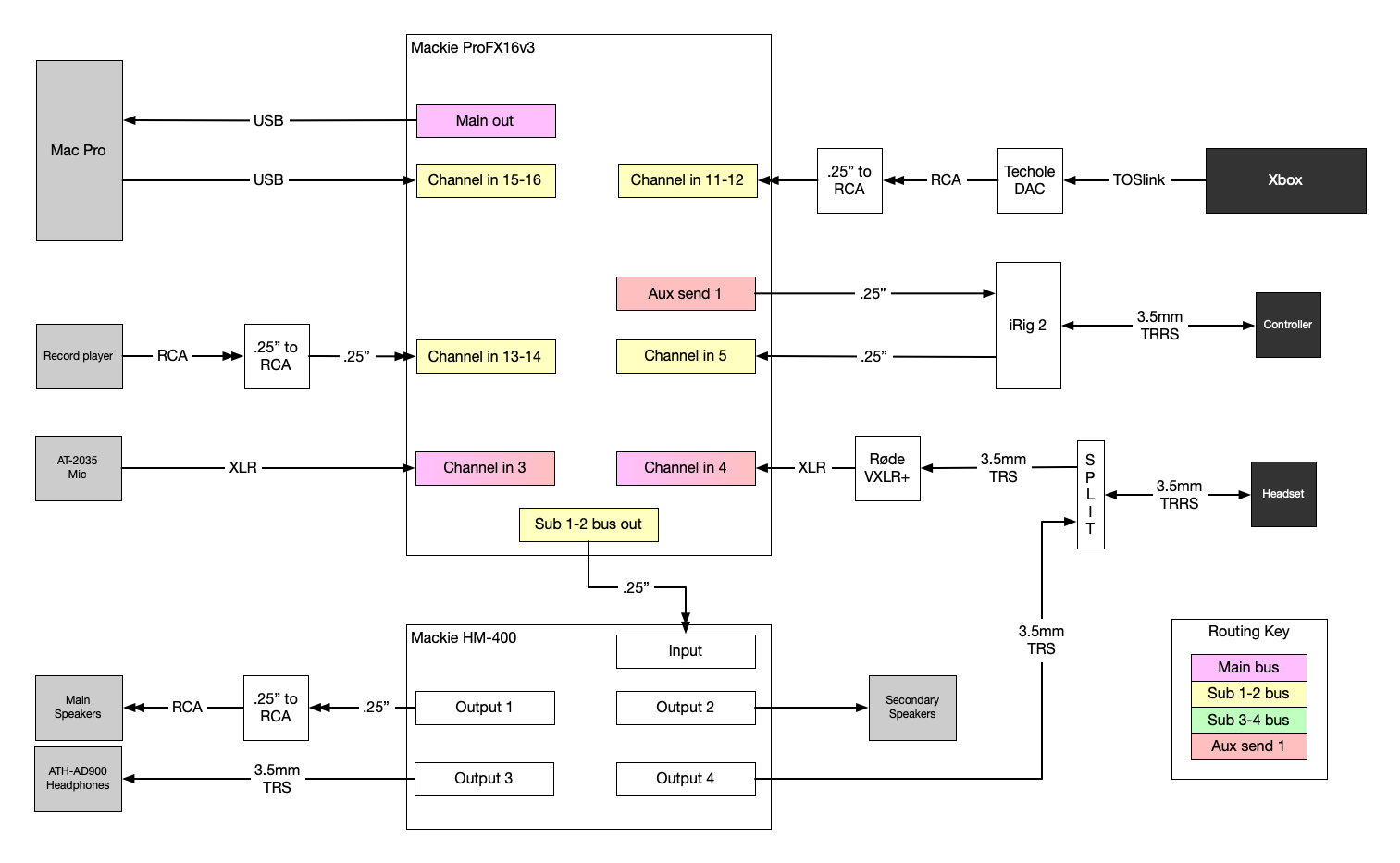 I’ve used this setup for a few days now, and I think I’m very close to wrapping it up. No more changes spring to mind in daily usage — but if you see something that could or should be better, let me know!